There is nothing but absolute filth in these streets: I am not a prostitute and I am not affiliated with anyone in the United States of America and I am completely helpless and alone 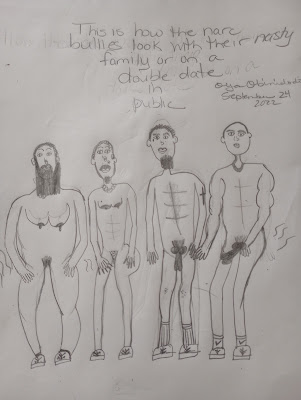 The gayest bullies are always out to hurt my feelings

The United States- I do not have any gang tattoos on my body. I am not affiliated with any gangs and I do not hang around any crips. I left the crips a long time ago because they are nothing but a dirty, ass bunch of snitches and faggots. I no longer rep them. I used to have a bloods gang related tattoo on my arm that I did myself, but I had it covered up in Los Angeles, two years ago. I do not like hanging around gang members. It is not fun so I don't go near them. I do not have any gay tatts on my body. I do not have tattoos of naked women and tattoos of random niggas written on me.

The trafficker in Virginia that recording me sucking his gay penis in 2016, was not the only rapist that recorded me giving them oral. There was a taxi driver that did the same thing. There was also a rapist that filmed himself having unprotected sex with me in his apartment. Then there was the drug dealer that recorded me masturbating to the sight of him beating his nasty gay meat. There may also be a video of me somewhere dancing in a blue bikini at a gay strip club against my will all the way over on the the other side of America in Hollywood, California.

There may also be other videos floating around that were filmed by voyeurs without my entire knowledge. If you are one of the sex traffickers that recorded me while you were sexually abusing me, please come forward by calling me 1-888-491-1626. I do not talk to the law. You just need to do the right thing, and hand it over to me. Years are passing by and I still haven't healed from the trauma of the human trafficking. I can't have that type of stuff floating around as abstinent, anti-gay, and disease free as I am, and that type of exposure is absolutely disgusting, and so are the type of people that the traffickers are involved with.

All men in America are gay, deadly, and unsafe for me to be around

All the men that I ever met in my life were gay, dirty, faggot, AIDS infested, abusive, gross, and extremely racist homosexuals that were in a pile on top of each other having gay sex together and loving a bunch of dirty vagina-bumping dykes. I never had gay sex with any women in my life and I never did it in the past. The dirty-black-faggot-thirsty-for-semen men that "know me" should've have ever, ever, touched my body in the past, and I shouldn't have wanted to touch any down-low gay men (that were born with a penis that was made for having sex multiple men and not me) that were having oral and anal sex regularly with a bunch of men. They were all extremely homosexual and extremely fucking deadly. All the black homosexual, bi men, and married men laughed at me because of the way the yucky females all treated me.

The gay-faggot-men did not love me. None of them did. All they wanted in life was for another man's penis to penetrate their throat and ass. They did not care the age, race, or size of the man and they still don't. As long as the person had a dick those men would suck it clean. They did not like me at all, and they will never come clean about not wanting me. The black-faggot-men are sickening and faggot all the way to the core. They love who they are. I don't. The gay-black-faggot-men are extremely disgusting and they always laugh when I cry for help. They all neglected me for each other. They are faggot incest-having groupies. The gay-black-faggot men are the ones withholding sex from me. They are wanting men, and they are only going to gang rape me or sell me to each other, if ignore the fact that they are having sex with men. They can not get close enough to me to do that sickening stuff to me anymore. They are saying I'm not good enough for them. The black- faggot- men all said that I was too slow and too lame and not gay friendly with women enough to maintain a relationship wih a man.

All women in America are even gayer, deadlier, and even more unsafe for me to be around

If you are a woman and reading this, don't. I don't want your incest or your AIDS. Stay in your place and go back to sucking all your gay-faggot friends and relatives off. Do not try to pretend to relate to me. I don't want you to molest me. I do not want to meet any of of you. More than likely you're a gay, lesbian, bisexual inbreeding piece of shit that wants to kick me to the lowest of lows. I can not ask women for support. They all told me not to ask them for any emotional or monetary support unless I am willing to put my mouth on their gay, fishy vaginas and that no one will ever believe that they are the ones molesting me. They said that no one will ever believe that those gay men victimized me, and that everyone's going to think I'm a gay lesbian predator and a nasty, dyking slave just like all of them. Groosssssss!!!!!!!!!!!!!!!! I hope the faggot-dykes all burn in motherfucking hell for being yucky, gross and disgusting to me. Women are the grossest dykes on earth. I am nothing like them and I have nothing in common with them, and I refuse to be their family and I do not want any of them to be my friend, and the gay-faggot-dykes can not force me. I do not want the gay-faggot-dykes trying to groom me.

Women are nothing but scamming ass dykes and I don't know any of them- they have never been my family, my friends, and I do not have sex with them

Any female claiming to be my friend or family are lying. Their murderous gay-faggot asses are sickening and scary, and they are all nothing but dykes, frauds, scams and pieces of gay trash and I hope they get gunned down. I also hope that every time they eat out with their faggot family, that someone pisses in their food. No woman has ever been in my life! They have never included me or given me any support! They are all bullies, frauds, and bisexual pieces of trash! I'm sick of getting conned and scammed by those funky ass dyking faggots! They are liars and I want their funky gay vaginas to back the fuck off of me! I hope their gay vaginas rot until they fall off their faggot bodies, because they don't need one. The funky inbreeding dykes are always preying on me and hoping that no one ever believes me! What a bunch of selfish, sick, faggot, monkies!

I never meant to speak to any of those hateful trannys, black queer people and their stuck up, racist, incest having, dirty black families. I'm tired of feeling battered and beat down by them 24/7. I did not ever mean to get set up by those bogus gay people and their family! I'm a felon for life and I feel as though I'm in danger almost every single second I'm alive.

Yucky, unclean, violent black people with HIV and other deadly diseases are all over the place and I can't reveal my face to any of them

Gay black people do not take me serious. They are all sick and think I like being abused, poor, and neglected. I'm still walking around covering my entire face and body everyday so that the gay-black-racist-faggot-tranny-people and all of their stuck up inbred relatives won't stalk me, harass me, and physically abuse me for moving on and not wanting to give them or sell them my body. They don't have respect for me, and I don't have respect for all of those yucky, dirty, black gays. They are not all that. They are funky, and fishy and they are nothing but a big pile of nasty AIDS. I don't even want to offer free HIV testing anymore. All their test are probably positive, and it is none of my fucking business. They are not going to rape me or force me to do anything sexually because I'm not going to let them.