My environment is deadly and life threatening: The crime rate and HIV rate in the black community is rising by the second 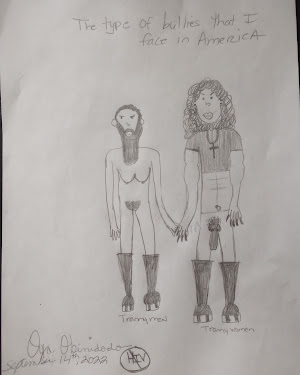 I'm still horrified by the staggering HIV/AIDS increase in the black community: I woke up in the African American community again

Suffolk,Va- That's right you guessed it, I woke up with ugly black skin again. I can't wash it off. I'm black forever and no one likes it. No one likes my skin color. The whole world is racist towards me. Even people that I thought looked like me, are not really my color. It just appears that we have the same skin and we don't. My blackness is different then everyone else's around here. I hate living around strangers. I've been alone in the system my whole life and I never met my real family. I was being trafficked, pimped, and sold by every black person around me. It broke my heart getting bullied and tortured by the whole black community, but it was meant to be. I will be a victim of bullying for the rest of my life. They are the scum of the earth and want to bully me until I take my own life.

The homosexuals are still being as unnatural as ever towards me. They are trying to murder me. They are as cruel and unnatural as they were two years ago. The incest people, the married swingers, the white racist, the dirty homosexual black men, and the brutal police force are still causing me the same gross, unnatural pain. I still feel their nastiness and abuse far, deep, down in the pit of my stomach every single morning. I decided I would be abstinent for a decade or more, so that a jealous, rapist, dirty, hating, illiterate, abusive homosexual black transwoman (like the one I was raped by 14 years ago), and murderer won't infect me with HIV and frame me to make me look like a gay prostitute. Two years out of the decade have already passed and the gay homosexual rapist are still being inbred and hateful. The local gays still want me dead. I can't even spread awareness in the city around them without them being ignorant and abusive. Unfortunately, my message will not reach them.

I got stuck around the hate all over again

Just recently, I got stuck and trapped in the most dangerous crime infested downtown neighborhood in all of Suffolk Virginia. All of downtown is extremely disgusting to be honest. According to the local news, just a few days ago someone was shot and killed where I have to walk by. It's where all the shootings, homicides, and sickening psychopaths walk and drive around. I am not safe! I'll be taking more dangerous, filthy, violent, crime infested public transportation until I can come up with $2,000 to get the repair done or purchase a new car. I can't get $2,000 in a dangerous disgusting area such as the one I'm in, therefore I am stuck. The bullies on the bus are just as inbred and sickening as the bullies around here driving a vehicle. I am scared I might pass away around the fake, the inbred, and the diseased. The extreme violence I am witnessing is too unclean and flat out racist and unfair. I do not want to look! I want to drive away to a secluded, less infected area!

I don't even have a safe place to rap anymore. Having a running vehicle was safe, now I'm on foot around murderers, bullies, scammers, peeping toms, child molesters, fake people, and dirty, downlow homosexuals. I have two platinum albums worth of unrecorded songs, but I can't rap or record around the predators. I can't do anything around predators or they'll just physically and mentally disable me and put me in a worse condition than the one I already been stuck in. I do not want to be around sickening people! Yuck! They are all disgusting, gross, dirty, funky human beings and are still trying to frame me for a bunch of crimes I never commited! Alot of them are extremely petty and are still jealous of me because I'm not pedophile, a rapist, a murderer, or a lesbian!

I didn't mean to let a bunch of homosexuals get close to me in the past!

The world is too filthy, hateful, fake, and unclean! I want out of this life! I am extremely afraid of all these sickening, murderous fake people! I never meant to like any of those gay men in the past! I never meant to touch any of those grown adult gay men! I thought they were straight! They tricked me and conned me! I didn't mean to touch their gay body! I didn't mean to let them get me out my clothes! I learned my lesson! I'm scared straight! I'll never sleep with another homosexual man! It was a mistake! I didn't know they were transgender! I didn't know that some of them were downlow male prostitutes! I did not touch any gay men on purpose! I didn't mean to get sold, threatened, or bullied by their gay partners and boyfriends! I used to be very naive! I would never violate or rape a transgender on purpose. I'm just upset because they went back and forth. One minute they were a man, the next minute they were a woman. The risk is just too high for an HIV infection. I'll die before for I let the gays scam me and I won't fall for a make believe marriage, a date, a night out, or a romance scam ever again! The gays can not con me anymore than they already have. I do not want a piece of d**k!

I 've been trying to flee the violence and move to a safer location for about a decade (I'm sure you already knew that), but I didn't get anywhere. I don't want the scum of the earth to blame me or frame me for any of the sick stuff that they do. They are sickening and deadly, and I want to be excluded and in isolation from all people. I don't know anyone, and I don't want to meet anyone new. I don't want the scum of the earth to continue stalking me. The people out here are extremely violent, hateful, unnatural, life threatening, and nasty.

Catching HIV is extremely life threatening: I'm not a whore but your current partner probably is, so be careful out there

Some wealthier blacks are not forced to live around HIV positive people and homosexual men (they are extremely violent and infectious, and I was overly exposed to the fatal virus nearly 2 years ago) and they are are very blessed and grateful to be in the position they are in, that is one of the reasons they look down on me. They will never think anything of me. They are extremely filthy, unsanitary, nasty, abusive, gross and disrespectful and they will always hate me. I wish I could avoid living in a highly infectious area, but I can't. The black community often confuses me with people that are transgender and HIV positive. They also confuse me with rapist, thieves, and child predators alot. I am not any of those things, but the black community is ignorant, and doesn't know that I am innocent. I do not know the black community, and they do not know me. If they did, they would know that I am not a sick, nasty, disease infected, evil predator.

I carry a few HIV test with everything I go, but unfortunately I won't be needing them for myself. I can not sleep with the gays. I don't want anyone looking at my face or my body EVER, EVER, AGAIN. I'm still abstinent and very proud of myself for not taking interest in sex. Five years from now, I will still be celibate, until I reach the entire decade. About 2 years ago, after being exposed to too many people with the HIV virus, I decided that I was completely fed up with being mentally, financially, and narcissistically abused, and stalked by sickening, nasty, dirty, cocky, jealous, lying, evil, racist homosexual and downlow gay men- some of those gay men have a vagina and some have a penis, but they are all still gay men.

All those homosexual men (the ones that were born a man and had a penis) that sexually abused me in various locations (mainly inside of a bunch of prostitute infested hotels) before I became celibate, were really gross and dirty, and they hated everything about me, from the color of my skin, to the fact that I wasn't gay, and the fact that I stayed to myself. To this day, those homosexual and transgender women are all still very goofy, cruel, sadistic, sickening, and controlling towards me, and I still can not speak to anyone or flee them forever like I would like to. I am still not safe.

I had big dreams of making it out of the life, but it all came shattering down beause the world still feels as though they don't owe me anything, and that they can all be as funky, unnatural, greedy, abusive, and sickening as they all want to be because my life doesn't matter to anyone. I eventually gave up trying to seek compensation from all of those bogus hotels. I threw all the evidence of the sexual abuse away (there is no more proof that I was ever human trafficked) several months ago. I don't need anything for the pain that the gay men caused (emotional distress, illegal spying, voyeurism, sexual trauma, false imprisonment, and gross negligence). The hotels can keep their funky millions. I don't have to be believed, and people do not have to care. I can just die and wash away like the rest of the deceased, it is not a big deal! I don't even cry around the gay predators anymore. I got tired of them laughing and mocking me. They are the type of people that want me to tattoo the tears on my face, instead of actually crying. Unfortunately, I'm not going to cry and I'm not going to tattoo a ratchet tear(s) on my face. I will never step foot inside of a hotel that I was sold in ever again, not even a decade from now. There are approximately over 20 big name hotels/motels (that I will not mention because they are pieces of s**t) that I know for a fact I will never step inside of. The feeling in my stomach is all too sickening to be sleeping in there. I will not give the hotels up to $100 a night for a place to sleep ever again. The homosexuals never wanted me to have a safe place to live and I never will. I can't try to override them because it is too many. The only power I have is to keep as much distance from people as possible.

The virus can last in used needles for almost a month. The HIV virus will last in blood, breastmilk, and semen for a lifetime. There can also be traces of it in saliva and human waste.

I can help prevent HIV

(*TheRoughOutdoors.com is not affiliated with any other non profit HIV testing locations)