Pronound crisis: I do not know the difference between a man or a woman 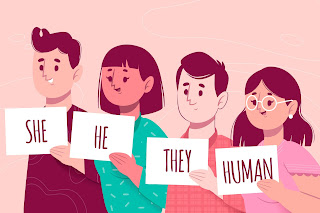 United States- Since I was born I knew I didn't belong in this world. I've always felt comfortable, especially around women. They were always stinky, smelly, and incestous looking since I was a young child. They looked like they had the “cooties” and they looked really funky and murderous. They still look that way to me to this very day. I always felt weird and awkward, around them, like I didn't belong. I've been surviving for three decades and I still feel the same. Over time, my discomfort and anxiety grew worse and worse.  Now, I feel unsafe in my own body and skin around them. I've never felt so sickening. Women look extremely sickening to me now. Everytime I'm around something that looks or acts like a female, I feel like my entire life is in danger. It's very, very, very, disturbing and life-threatening.

Too much twisted confusion

I can not tell the difference between a man and a woman anymore. Just because they look like a female, that doesn't mean that that's the gender that they wish to be. I was raised to believe that a female has breast and a vagina, and that they have hair and makeup. That type of information and old school upbringing was completely false. In reality, some females actually have penises, and they don't have breasts. Some males have breast, and they don't have penises. Some males have on dresses, long hair, and painted nails, have breast, and have a penis, and some women have a vagina and a long beard and a mustache.

I've decided that the only way to solve the pronoun crisis in America, is to call anything that looks like a “female” a man, and anything that looks like a “man” a female. I'm celibate, and I'm not a OBGYN doctor or cosmetic surgeon, so I don't know what type of genitals people actually have. I can't always assume that just because someone looks like a certain gender, that that's the gender that they really are. I do not have to see peoples genitals to know what pronoun they are. I’ll just call them whatever I think they might be.