Sudden demise: When the bus doesn’t go as planned 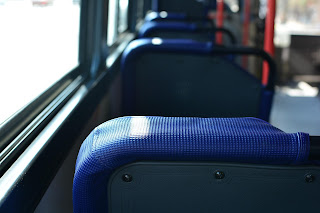 One day, I decided to take the bus to New York City. It was a cold, rainy, day, and I wanted to run away to a new area to escape poverty. I went to the bus station and purchased a ticket. Everything was going smooth and as planned. I spent 15 seconds in NYC and decided I was going to leave. It looked dirty there, and I felt like prey. I grabbed a slice of pizza and went back to the bus station. It was packed in there. It was extremely unclean and uncomfortable. There were babies crying, fat people, people with body odors, and dirty restrooms.  There were bogus looking homosexual women standing in the front, holding hands. I wanted to get the hell out of there. I started to receive nasty hate mail text. Some of the hate mail read:

Bitch you gone die out there you’re a piece of shit and don’t nobody like you.

You’re ugly and a crackhead fiend. You’re just mad cuz you’re a felon and I’m not.

I immediately vomited and started talking to myself out loud in front of a bus station full of ugly, dirty people.

“Ewww!!!! What type of faggot fucks keep sending me these threats! Yuck! Why don’t the gay dirty monkeys go away!” I yelled. There was throw up all over the floor. Everyone in the bus station saw it. I started to kick and scream and everyone stared at me, with a funny-looking face. One of them said,

“Is everything okay, you look like you need some help?”

“No I’m okay, I’m just ready to die or get the fuck out of here. I’m getting bullied and stalked, and no one believes me. They are real creeps.” I said, crying because the predators embarrassed me like the diseased infested homosexual pigs they are.

“You sure? You don’t look okay. You look very frustrated.” Said the bus rider.

“Yeah I’m okay I don’t know what else to do. People don’t care. They’re sick and mean out here. They’re all bullying me and I don’t want to be near them. They’re gross and disgusting and I just want to jump in front of a train.” I cried to the stranger.

“Don’t do that. Please.” Said the stranger. I immediately walked away because I didn’t want the faggots to snitch to the police about me wanting to die. All they would do is put me in a mental hospital so the faggots in there can molest, abuse, and neglect me. It’s sick. I knew I had to die for real. The world hates me. They always have. I couldn’t let the incest people and the employees molest me anymore. I just couldn’t.

It started to get late. The bus started to load and I sat all the way in the back where I usually sit. It was packed of course, and I hated every minute of it. It was extremely dirty. Most buses are. The bus driver started talking over the microphone before pulling off. About 2 hours into the trip, my stomach sank. Something felt funny, and I knew what it was. I was going to die. The bus driver started driving over a long, long, bridge. The bridge is about 20 miles long. I was scared to death. It started getting windy outside, and the bus started to shake. The bus driver started dozing off, and the bus started drifting off to the right, until it fell all the way off of the bridge into the water. Passengers yelled obscenities as the bus fell over. It immediately started sinking to the ocean floor. I drowned of course, while I was still trapped inside of the bus.