I never liked black people. They are very gross people, and I will always be poor because of them. Black people are so fucking sickening, that I wanted to kill them with witchcraft. After I got fired from my job, a decade passed. During that decade, I was getting molested by more than 300 sick predators at one time, and I wanted all of them to go away. I didn't have an exact number, but I assumed it was close to 300 pedophiles and predators. They all kept victimizing me over and over. It was sick. What type of sick predators still keep preying on me for that long? I asked myself. “Couldn't they just rape and torture someone else?” I thought aloud. One day, I flew to a witch doctor 1,000 miles away from where the rapist and child molesters were hurting me. Soon I walked into the shop, he had his back turned. He said,

“But I'm not here to buy the whole store. I only want one thing, and that is to make the people that's been hurting me, to go away.” I told the priest.

“In order for that to happen, you have to buy the whole store. You have the money.” said the priest with certainty that I could make them all stop for $14,000.

The priest turned around, and pulled out a bottle of Florida water, and then lit a white taper candle. The priest, dressed in all white with an all white hat on, walked around me in a circle chanting.....

His words faded off into the distance, as he chanted for 15 minutes. I didn't understand anything. He started talking in a foreign language. He was waving the lit candle around my head and up and down my body. He sat the candle on his altar, and then started to spritz me with mist from a clear bottle labeled “Florida water”. He then pulled out a live chicken, and cut off the head. He put a cross symbol on my forehead with the blood from the chicken. He then spritzed me with more Florida water. He then picked up a bottle of vodka, took a swig, and spit on the dead chicken. He handed me the bottle and proceeded to draw a pentacle around the dead chicken with rock salt. He performed more rituals for 14 more hours until he finally said, “Go to the back and pick any white dress you like for free, go to the bathroom, and put it on.”

I listened to the priest as I walked to the back and chose a white dress from the store. I went to the bathroom and put it on. As I came back out of the bathroom, he handed me a scarf and a statue of what looked like a skeleton wearing a robe, holding a scythe.

“I will put the scarf on your head. Oya.” said the busy priest. He tied the scarf around my head, while I was holding the statue. Then he put a necklace around my neck that had a pendant attached. The pendant looked exactly like the statue.

“You're an Oya priestess now. The store is yours. You can keep your money. You can make them go away for free. I will not charge you for this service. It is my duty.” said the man.

“Oh my Gosh! This is awesome. You're really cool. Thanks for turning me into a priestess. Now I can make them go away.” I said, laughing.

He handed me the keys and the paperwork to the shop and signed everything over to me.

“I will come to check on you every once in a while. Please, take care of the altar. All you have to do is burn all of the candles in the store, and the money will keep coming, that is all you have to do.” said the priest with confidence, as he left out of the shop. I never heard or saw him again.

“Wow,” I said out loud. “This is so cool.” as I walked around the shop, picking up random things.

I picked up a book and on the cover, it said “Santa Muerte”. It had the matching statue and rosary on the front like the one the priest had given me.

I started to read it, but it was all in Spanish. I then picked up another book. It had the same skeletal figure wearing a cloak on the front. The title read “Holy Death”.

“Wow! This must be the one!” I said with extreme excitement because I knew I was going to make the child molesters and rapist leave me alone.

I started reading the book. The book was explaining who Holy Death was, and where it originated. It explained the skeletal figure, which was a lady, to the core. I got to the 100th page. The intro read “Spells”. I turned the page.

Kill your whole family, because they're ones molesting you

50 boxes of candles of all sorts and colors

300 Real Human skulls and bones (must be real)

I stopped right there and closed the book. “This a joke, I'm out of here. Where I'm I going to get human skulls?” I said, laughing hysterically.

I walked toward the door.

“I see why the priest gave me the shop. This stuff is silly. No one is going to go out and kill all those people for a bunch of human skulls. This is so funny.” I said with humor, as I began to lock up the shop, but the door wouldn't open. I keep shaking the door, and turning my key, but I couldn't get out. I was locked inside.

I ran back to the telephone, but there was no power. The phone was disconnected.

“What the hell!” I screamed, as all the lights shut off inside of the shop.

“I got to get out of here!” I ran back towards the door. It was still locked. The glass on the front door seem to be unbreakable. Nothing would get me out of there.

I lit a few candles so I could see my way around. It was pitch black dark at first. There were hundreds of statutes and books, and different things you would find in any witch doctors store. I lit about 20 more candles for more light, and I even had one in my hand. I walked around the store and then I discovered a huge treasure chest in the back. I opened up the chest and vomited, at what I saw. It was 300 human skulls, and a bunch of bird feathers.

“These can't be real, no way.” I said as I examined the bones closer. I picked one of them up.

“Omg! This looks so real!” I said in fear for my life. I picked up more of the skulls. They all looked real. I walked back over to where the book was, to see if it had an answer to my problems. I continued reading.

Take the 300 skulls and place them at the altar.

I saw the altar, somewhere in the store. It wasn't hard to find. I was standing right in front of it. I placed each skull around the altar one by one, until the chest was empty.

I assumed that the dead birds were in another treasure chest somewhere. “Ew,” I said. “Why would anyone keep dead birds in a chest?” I searched the entire store for the dead birds. They were laying in a box, inside of a storage closet. I carried them back into the room where the altar was. I placed them around the skulls.

Light 300 black candles around the altar. Stick one pin in the 300 black puppets. Every time you stick the pin in, say these words:

“You can’t hurt me anymore, because my Holy Death, will shut the door”

I lit the candles and stuck one pin in each of the 300 puppets while chanting.

Light 100 more Holy Death various candles. Draw a huge pentacle on the floor with white rock salt, and wait for the spirit of death to enter the room.

I lit 100 more candles and drew the pentacle on the floor. I sat in silence as I waited for death. Nothing came. 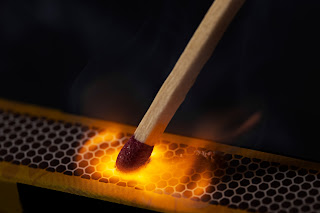 A Match being struck for fire- Free image on Freepik.com

“Hello? Is anyone here? Death, are you coming to find me? Please? Answer me! I've been sitting here for several minutes.” I said out loud, as I smelled smoke. I stood up from the floor and saw several large clouds of dark black smoke seeping from under the front door, closet doors, and bathroom door. I wondered where the smoke was coming from. I didn't leave any candles burning. They were all right there in front of me.

A minute later, the whole room was covered in smoke. It was so dark in there, I couldn't see. I could still see some of the candles burning. A few more minutes later, I started to see flames arise, from each of the four walls I was trapped in. The whole building was on fire, and I was trapped inside. The fire spreaded very quicky, and I was covered in flames. My flesh started to melt, and I became ashes. The only thing that remained, was my charcoaled skull.