I woke up again around the gay black people that bullied me, harassed me, molested me, lied on me, and made me look like a retarded slow person. I immediately started vomiting. I felt extremely sickened in my own skin and I wanted to die so they wouldn’t hurt me anymore. They were really, really, sickening people. Death was the only way out.

“I’ve been putting up with these gay black predators for a whole decade. I’m sick of this.” I said, crying and screaming, wishing I had a gun to blow my brains out. I didn’t want to die in front of the jealous, gay, pedophiles, because I was scared they would all tell a bunch of lies on my obituary to make me look like I knew them personally, or urinate or throw feces on my grave. I did not want the gay black predators to put anyone on my obituary. They molested me. They threw me away, and would have the nerve to put their names on there like they didn’t do anything. They would act like they were in my life and they weren’t, just so they can get some sort of recognition at my funeral. That’s the grossest thing I’ve ever seen. I didn’t want to get buried by the pedophiles, and I don’t want them to give me a funeral. I don’t want them anywhere near my deceased body. I don’t care what “relative” they claim to be. I don’t want those gay pedophiles to give me a funeral. They bullied, harassed, and molested me the entire time I was alive. I need a voice. I’m a human being.

I started packing my things, and drove as far away from the gay black families that were controlling my life and threatening me daily. I drove as far as I could. They were having a lot of incest with each other, and they wouldn’t stop calling me “retarded” and “gay” and I was neither. I didn’t know any of those sickening creeps from a can of paint. They were jealous of me because I didn’t want them to molest me or throw me away. The incest people kept saying “you ain’t takin nuttin from us, you ain’t takin nuttin from our kind of people.” They all sounded so unnatural and ignorant. It was extremely fucking nasty.

I said to myself outloud , “I’ll just die, since I have to be raped and molested by them in order to live around them. I don’t have to take anything from the pedophiles. I don’t have to want to live on their turf.”

When I arrived at my new destination, I unpacked all of my supplies and set up my tent. The destination was so perfect, I thought I was in paradise. The weather was nice, and the campground looked so clean and perfect, that I never wanted to leave. I had all of my camping supplies, including a $1,500 Bell tent. Every morning, I made coffee, orange juice, pancakes, bagels, or waffles, with the little money I had. I walked my dog on the trail six times a day. I hiked near the water, and took pictures of the scenery. What surprised me, was that there were no other campers on the campground. I was happy that I was all alone, and didn’t have to look over my shoulders, in fear that the gay black people would start harassing me again. Their harassment was ongoing and sickening to the max. 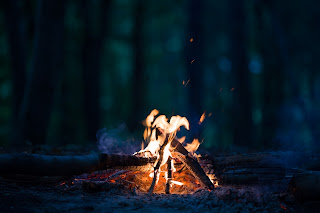 Image by Kotkoa on Freepik.com

I watched a little TV, on my portable television. There was nothing good on. It was a bunch of white people on every channel. The channel with the blacks, made my stomach sink. I couldn’t watch, they were too gross. I cut the TV off completely and ended up selling it online for extra cash. I listened to my music instead. I started playing songs that I recorded at the music studio, several months prior. I started a campfire, and made S’mores. I took my dog outside to an open field nearby, where he caught a wild turkey. I roasted the turkey over the campfire and served it to my animal with a side of white rice. Life couldn’t get anymore peaceful, without being molested, stalked, tortured and abused by the groups of ugly monkey people. Everything was going smooth until one Tuesday evening. I stepped outside to walk the dog and I saw a large, black, cloud forming in the sky.

“Looks like it’s about to storm.” I said. I knew it was going to rain. I had been solo camping outside for so long, I wasn’t afraid of a little rain or thunder. I put a tarp over my tent and said

“The rain will pass in about three hours.” While looking at my weather app. About six minutes later, an emergency warning popped up on my screen. The message read:

It was 6pm. “I get these kinds of warnings all the time. There’s no tornado coming through here. Nothings going to happen, and if it does, the gay incest people won’t bother me anymore!” I said out loud, as I headed back inside the tent. Around 6:30, I peeked outside again, and I saw a huge whirlwind headed in my direction from a distance far away. I grabbed by purse and my animal and hopped into the car. I started driving in the direction away from my tent, and away from the tornado, but the huge, black, whirlwind just kept getting closer, and closer. The whirlwind lifted up my entire car, and twirled it around in the air for several minutes, as it moved it’s way through the open space. I knew I was going to die. The tornado wasn’t just going to place the car back down on the ground politely where it was. I said a quick prayer, to Saint Death, as the car came tumbling down on the ground, splattering into pieces. I didn’t make it. Me and my puppy died on the scene. No one discovered the car, until several days later.