Sudden Demise: An armed robbery turned deadly at a nightclub 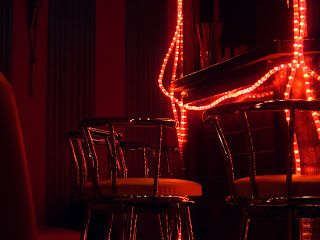 After a group of black people snitched on me in South America, because I didn't want to hang with them, I was deported back into the U.S. I had spent a whole decade hiding from them in South America. The bullies kept sending threats to my cellphone out of no where, telling me I was going to get deported. The threats kept coming daily, until it actually happened. I was in North America, in Mexico first, then I went to Honduras, Peru, and Brazil. After I got deported, I went straight to New York City. What's the reason for hiding now? I thought to myself, since they already snitched.

Now I don't usually go to clubs, but I wanted to rob the owners of a popular club in New York. I was in New York City one cold winter night, dressed in all green and a long, black, $5,000 mink coat, that I made myself back in South America, when I met a stranger on the subway. His attire was attractive of course.

“What’s up Ma. Where you going. You looking mad fly.” said the man wearing the sexy, expensive, protective gear.

“I ain't all that, but I did make these furs myself.” I responded.

I had no idea what he looked liked underneath all of his body armor. He wasn't the police or the cartel. He probably was just a gang member. He had on a bulletproof face shield and helmet. His knees, arms, and legs were also covered with the gear. It was so attractive I nearly fainted. After we got of the subway at the exit, he flashed a large gun tucked in his waist. I liked what I saw.

“I got several of these for sale. You know anybody? I know you aren't the people. You don't look like it ma.” The fine man said.

“Me. I'll buy em. Meet me at the the top floor of the parking garage so we can talk cash.” I told the instant boss.

He followed me up to the top level and I pulled out a wad of cash out of my matching black mink fur handbag.

He laid three AK-47s out on the hood of a Lamborghini.

“How much do you want for all three?” I asked eagerly.

“Listen ma, if you only have three than you can only take two. Feel me?” said the mysterious fast talking New Yorker.

He looked more shady but I didn't even care because I was ready to put a sickening scheme into place.

“I'll take two.” I handed him three thousand dollars, and he handed over the guns. I put them under my handmade mink coat. There was one tucked on each side. One on the left and one on the right.

I never saw the man again. I stood outside of the night club that I had been plotting on for several months. I went in when the security wasn't looking. I was able to make my way to the back of the club. To my surprise, the club was empty. No one was even in there. I let out a sigh of relief because I knew where the safe was. It was hidden on the lower level of the club, near the basement. I even knew how much was in there. It was $100,000. I had been plotting on the heist for quite some time. The only problem was, I didn't know the password. They changed it ever other day it seemed like. I waited for hours and hours for someone to come back there so I could make them open it.

Some one finally came to the back. I shoved the barrel of the gun down their throat. It was a old black man.

“Gimme me the motherfucking password to the safe. Now!” I demanded in a evil, sinister, tone.

“I ain't giving you shit bitch!” the old man said as he spit on me.

“Bitch what the fuck do that got to do with you! This is my club, and I can watch whatever the fuck I want. You not the police. You ain't nothing but a broke ass crack head prostitute that can't make money because no one wants to buy you. You think you can just storm your ass in my club and demand money. Bitch who the hell do you think you are? I'll send your lame ass to hell where you belong just for coming in here.” said the piece of shit owner.

“You know what papi. Imma let you off easy. I'm not going to blow your brains out.” I said. “But you are going to die, and you know what, if niggas like you talked to somebody your own age, maybe someone would buy me. Unfortunately, you pieces of shit are too busy buying children!”

I put a bag over the ugly man's head and suffocated him to death, while pointing the gun at him. He passed out and died a few minutes later. He didn't even resist. He thought I was a peasant. I was sick to my stomach. I still didn't get the code to the safe. By that time, the club started to get packed to capacity. I rushed out of the back and went to the bar, where I pulled out my two AK-47s from under my mink coat, and started shooting in the air. No one got shot. They all scattered out of there screaming like roaches. No one was left inside. I knew the police were on the way, so I had to think fast. I found an emergency exit in the back. I ran out of the club as fast as I could. I carjacked the first person I saw, and drove away.

I had never been so disappointed in all my life. I did not get the money out of the safe that night. I thought the man would cooperate. I went to a hideaway, all the way on the other side of town. I knew I had to let go of the mink and the car. I didn't want to be spotted in it. I broke into one of the cars nearby when I burst out crying after the car alarm sounded. “Fuck! I didn't even get the money. What have I done!” I stuffed the mink in the trunk and drove away. I changed into an all-black sweatsuit, and a ski mask. This is not the heist I intended to pull. Here I am running from a murder, a carjacking, and grand theft auto. It was too much vice going on. I needed money to fly to Paris, France to hide. I needed to get away. I wanted the robbery to go smoother. I hated wearing all black sweatsuits. I liked wearing furs. I hated prison food, I liked steak and lobster. What was I going to do? I should've tortured the man more, but he probably would've still be talking trash. I didn't want to go away for life.

I drove to the nearest cliff, and sat there for hours. I said a silent prayer, as I jumped off of the cliff and went plummeting hundreds of feet down to the ground. I died instantly. The first face I saw in the afterlife, was the man I had killed.

After I answered his question, the man disintegrated in to fine dust, and ended up in a pile at the floor of hell. I started walking around, with flames all around me. A thousand live minks appeared and started crawling all over me. They wouldn't die. The minks stayed attached to me as I walked around hell. A century later, the minks were still crawling over me, biting at me. It was absolute torture.