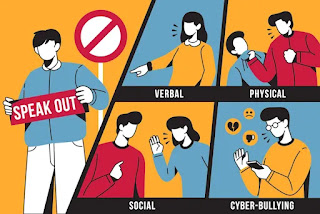 Stop bullying - free image- Freepik.com
By Oya Obinidodo
I've hated being in the city I was born my entire life. Every second I spend there is extremely painful and annoying. Here’s why.

I can't get a job there and i’ll always be poor.

I cannot get a job there. Every job I have ever had there did not last. I was either laid off, I quit, or I got fired. Before I stopped going to public places, I would go to some of those same places, and see the same nasty faces still working in there a decade later. It was extremely hurtful and disgusting at the same time. I knew I was getting bullied by those funny looking coworkers and supervisors. They all sucked. They all treated me like a throw away, and a useless piece of trash. It was horrible. Nowadays, there are no more jobs left, for a person like me. It's a good thing because I don't have to witness their crimes against humanity anymore, or look at their ugly, disgusting, faces every day. I also do not have to listen to them boss me around, or let them steal my personal information. I don't have to get spied on, envied, or set up for more failure. I don't have to wear an ugly uniform, or see homosexuals coworkers. I also don't care about the city's unemployment rate.

Because of the inbreeding infestation.

Most of the people there, have a lot of unnatural sex with their own family members. Some of them even produce multiple children from their incestuous relationships. They have parents that are extremely sickening. Their children have a lot of birth defects, intellectual disibilities, and are always in non stop pain and agony all day long. Living in a town where people that inbreed that much, and are proud of it, is extremely disappointing and gross. They have no regard for human life whatsoever. They like to keep everything within their “family”. That includes money and power. Yuck. My level of disgust for them is absolutely insane and inhumane. They have that much unnatural sex  within their family, and then complain at the pettiest, smallest things when an outsider like myself, happens to run into them somewhere. I still don't want to see those disturbing people. They love to threaten me with sickening amounts of hate mail, especially whenever I flee their infestation. The unnatural threats just start rolling in.

Their prison systems have way too much space available, and they are extremely needy and greedy for every single penny. They should all be full, and I should not be one of the ones filling up a bed. I do not want to get a glimpse of the inside of another prison. They are all equally a place that I should not be in. They are full of the P word, the G word, and the M word. Just think of all the nasty crimes against humanity you can think of. There are people in the jails and prisons who have done that stuff, and will continue to do that stuff. They find their sick twisted crimes to be quite normal to them. If some one else is doing it, then they assume that it's normal. I don't do any of the sick stuff that most of them are into, but they don't know that. People are racist, and they assume that prison is where I should be. As a single mother, why would I want to be in there without cause? Do they assume I should be in there just because there are other single moms in there? Do they think I think it's fun? Do they think I'm gay? What the hell is wrong with them? I don't want to stick around to find out.
Even with all of my tattoos, I'm still innocent, and I shouldn't have to explain. Not everyone with tattoos are innocent, so the system doesn't know that I'm innocent. Civilians don't know that I'm innocent either. No one knows, because no one cares, and they don't have to. They can mind their business. I've been neglected long enough to ignore them. I have to watch my back in that city 24/7. I also have to sleep with one eye open. There are creeps everywhere, and they make me feel extremely creepy and disgusting. The predators don't seem to be losing as much sleep as I'm losing either.

I’ve never had a normal relationship or any friends or family.

I will never have any friends, a family, or a relationship in the midst of a city that is filled with inbreeders. There are thousands and thousands of homosexuals there that are attracted to each other, which is another reason why I will never be normal. I can not have a normal relationship with homosexual men. They are not attracted to me. They will do anything they possibly can to eliminate me from the picture to be with a man or a child. I can not be friends with women, because clearly, they are also extremely homosexual and violent towards humanity, and have made it clear numerous times, that I am not welcomed, because I am not a homosexual. That is why I'm never invited anywhere, never given any money, or never being accepted.
The people there have wild homosexual orgies, incest, and lots and lots of unnatural sex with minors, and they carry a high amount of non fatal and fatal sexually transmitted diseases. Society there has no empathy at all. They are very cold. The people that do speak to me, are usually a predator, a pedophile, or a junkie. People have treated me extremely disgusting in the past, and my hotline is still not ringing at all. The people are so sickening, that they are never going to speak to me again, because I am extremely aware that they are all just nasty, evil, child predators that have nothing to offer me or my kids. They are extremely fake. The people in the city are about as useful as a dead fly or a tiny piece of dirt. They won't give me anything, and they are extremely nasty. I won't be just another number for them.

The way the people talk there is so disgusting, that I literally can not listen to them talk anymore. They love to say “And” and “So” in the front of all their sentences. The way they sound is extremely foreign to me. I might have been born there, but hearing them speak after fleeing so many times, is just flat out sickening. I don't ever want to get used to the sound of those nasty, hateful, southern, nasty, fake, gross voices again. They all sound extremely brutal and abusive. I feel like I'm catching a deadly infection or disease just by listening to them.
Labels: American crime city survival Crime rate skyrocketing extreme poverty gang stalking gangs human lifespan Oya Obinidodo prisons racism in America terrorism true crime unemployment Urban survival